Carrying the Mail to Conifer 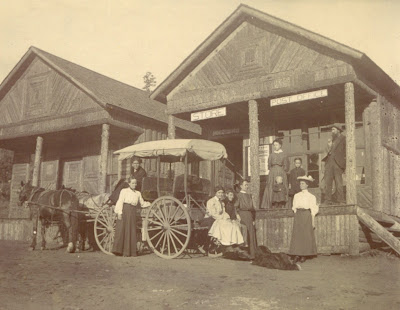 In 1895, Maggie Crow and Naomi Found volunteered to carry mail to Medlen, nine miles from Morrison, to prove up a mail route. After the trial period, the U.S. government contracted with Will Crow, Maggie's husband, and Maggie carried the mail for two years, using a wagon like this one. The photo was taken in 1907, during Will's second contract period, when Maggie shared duties with her daughter Dora. Left to right, front: Maggie (on wagon), Kate Snedeker, Julia Morris, Vern Crow, Edith Snedeker, Dora Crow Snedeker. On porch, Mrs. Clark Snedeker, Oliver Overman, Patsy Snedeker, and Clark Snedeker.

As Maggie tells it (read the rest of her story here):

Mrs. Anna Biggar was named Postmaster for the Medlen Post Office located about nine miles from Morrison on Turkey Creek. Mrs. Maggie Crow and Mrs. Naomi Found volunteered to carry the mail, each coming one day a week in turn to Morrison for the Medlen mail.

On October 15,1895, the Medlen Post Office was established and mail service started. At the end of the six months period when the cancellation money was divided, Mrs. Anna Biggar received $1.46 as her share as Postmaster and Maggie Crow and Naomi Found each received $.73 as their pay for carrying the mail.

At the end of the six months the contract was let and mail service was then established daily between Morrison and Hutchinson via Turkey Creek and the Medlen Post Office. W. L. Crow was awarded the first contract starting on April 15, 1896, to July 1, 1898, at which time mail contracts were let for the period of four years. So on April 15, 1896 the mail route was started between Morrison and Hutchinson with Maggie Crow as mail carrier.

There was no free delivery of mail along the route at this time. Each patron of the route paying the mail carrier 25 cents a month for delivering the mail to their box. Owing to the fact that mail for the Hutchinson Colorado was often missent to Hutchinson Kansas, early in 1897 the Postmaster of Hutchinson, Douglas Hamer, had the name of the Post Office changed to Conifer.

W. L. Crow was followed by Joe Hocking as mail carrier. During the time Mr. Hocking carried the mail, he had the route changed to come down North Turkey Creek from Conifer to Morrison in order to give the residents of North Turkey Creek daily mail service. And from Morrison to Conifer up South Turkey Creek as originally established. Following the Joe Hocking contract, Robert Kemp was awarded the mail contract in 1914. Mr. Kemp was the first one to use an automobile on the route, thus ending the horse and buggy days though at times in the winter months when the roads were bad he had to use horses in order to get the mail through. 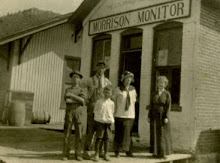